Originally this was planted with lots of shrubs. However, after years trying and failing to keep on top of the weeding (lots of bindweed), we finally decided that the shrubs were too big, too boring and too high maintenance for not much return.

The main uses of the garden are as a thoroughfare, drying washing and parking bikes (as you will probably gather as you read on, we’re rather environmentally-minded). Oh, and Keith’s office is in a shed in this garden, so he gets to look at it lots. Things had to change. The shrubs were removed, along with four massive ash trees that overhung this garden, the courtyard and the top of the drive. Without the trees, the garden is much lighter and grass now grows easily in the whole area – we regard grass as ‘low maintenance’ although that goes against conventional wisdom, but Keith loves mowing so …

A particular pleasure of this garden now is the laburnum which was suffering in the shadow of an ash before and is now thriving. This is one of my favourite trees – it reminds me of the one in my grandparent’s garden in Lincoln. 1000 crocus bulbs have been planted to complement the spring flowering laburnum. Some other interesting trees were planted in this garden by the previous owners – Catalpa bignoides (Indian Bean Tree) in the middle of the lawn, and Amelanchier lamarkii (Snowy mespilus) with the circular seat around it. There is also good autumn colour coming from the Virginia creeper on the shed, the Rhus typhinia at the top of the steps, and the aforementioned Amelanchier.

We use our bikes as a form of transport, rather than sport, so bike parking has been arranged beneath Keith’s office window. The racks were reused from a house nearby, after the owner died – we hope we can continue to use them into our 80s as the previous owner did!

Alan Titchmarsh, in his Groundforce days, was always very derisive about washing lines. But we regard this as an integral part of this garden. Function over appearance, every time! 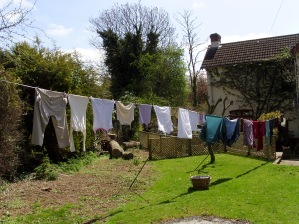