The good news is that I finished pruning the orchard on 25th February – earliest finish yet, I think. I’m planning a proper blog post about it soon, and maybe an accompanying video, if I get around to it before the buds burst and I can’t show you anything useful!

But the priority now has to be tidying up after the storm damage. We lost 1/2 a large conifer, a hawthorn covered in ivy, a dead elm that I had mistakenly believed belonged to next door. Also, because some ash trees on the drive were in danger of falling, we had them removed too. But that left us with a huge pile of brash to get rid of – a bonfire was the only solution.

Hawthorn tree falling on to the fence and back road 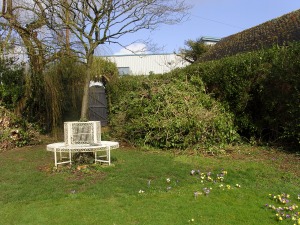 Remains of half the conifer that fell 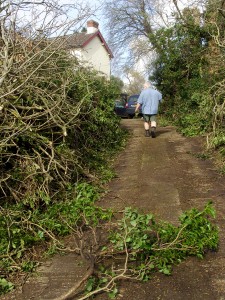 View up the drive through the brash tunnel

View down the drive – loads of brash, and orchard prunings 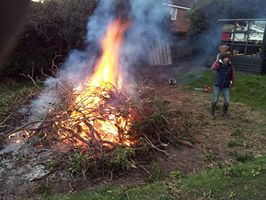 Large bonfire that lasted about 5 hours

Despite the massive bonfire we only got half the brash tunnel cleared – the piles of orchard prunings are still there, and the back garden is still full of conifer and the elm and hawthorn. And we have a massive wood pile.

Where the fire is will shortly be vege plots again. But first we plan to drag as much rubbish over to it as possible, then have another fire. Part of the reason we stopped on Saturday, besides all being exhausted, was that we couldn’t see to drag stuff across to the fire. So we plan to drag stuff over there in daylight, then have another fire. I’ll try and shred the orchard prunings as they’re pretty straight and that should be pretty easy.

Meanwhile, I need to coppice anything that’s getting too big (some ash and poplar around the garden), coppice the hazel hedge, prune the roses and clematis, and weed everywhere as the weeds have’t stopped growing in this mild winter. The lawns need mowing, and edges strimming.

But the crocus bulbs we planted in the back garden last autumn are looking splendid.

Back garden full of crocuses

About Home on the Hill